no way in hell we would have kept still for ANOTHER hour! So we left. 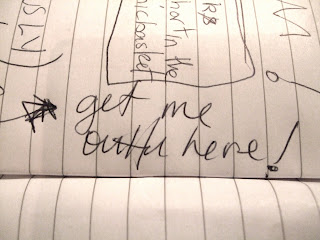 Preshow:
I started an experiment that didn't quite turn out as I imagined during a pre-show talk of tonight's show at the Norwich Cathedral. These talks are challenging for me - especially BEFORE watching the show. Was such a challenge for me, that my first instinct was to check in on the kids. To find out how they were doing, I passed around a small note that said:

"if you're bored, make a face in the camera (pass it on)", along with a running video recorder.

This was going to tell me who was bored and would also help show other jury members how they felt about pre-show talks. Pretty clever, eh? The teacher/staff lady caught wind that something fun was happening and when she read the note, she turned beet red. Thankfully the note continued to pass along, but it got shut down when one kid made a big pose and caused too much attention.

After that was over we played a big game of tag to refresh ourselves and then took a walk down the road to Tesco Express cause Josh was hungry. He bought a cookie and a bag of chewy savory snacks for a total of 1.73p.

The show started to a full house and the old cathedral came to life (imagine gothic architecture, stained glass, you can wiki it for more info). Immediately the kids I sat beside doodled and passed each other notes.

"Its sucks two eggs short of a picnic basket" 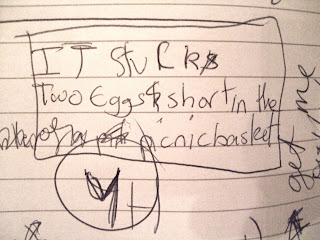 "we're claping for nothing because its so rubbish!" 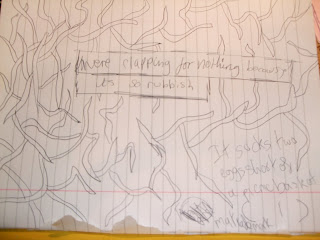 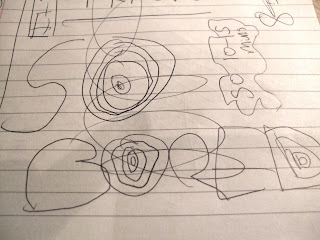 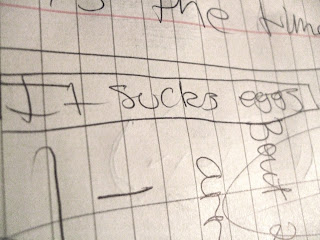 "0's all round 4 this performance & most boringist act."

By the interval, forty minutes later, it had been requested that we vote on whether we should stay or go. Each person stated their truth so we left.

Who knew theatre could be so...dramatic? Ha! Nevertheless, we're thrilled that most of the kids (and their parents) from Ecole Aurore want to continue with the project. On Wednesday Jury group #4 saw Edith Kaldor's 'C'est Du Chinois,' the second group to see the show. This was a good opportunity for me to pay closer attention than I did the first time, and I took detailed notes that helped me to better follow the last 1/4 of the performance. Once again the cast stayed afterwards to meet the Jury and share some chocolate. By request from the Jury, here are my Mandarin notes from the show: 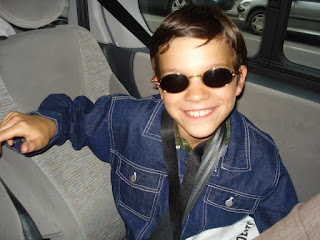 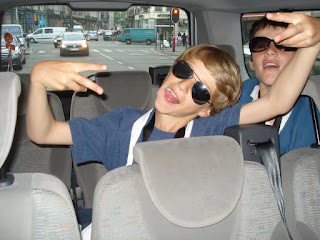 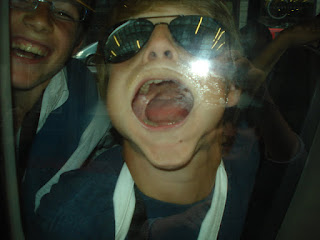 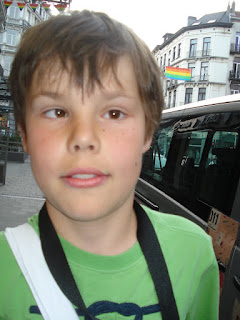 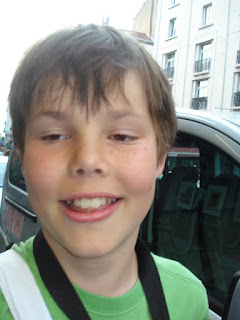 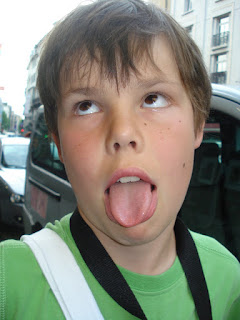 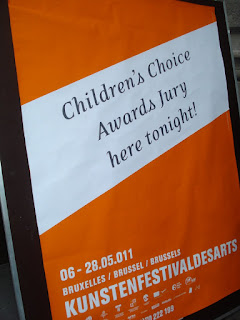 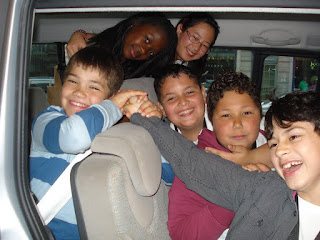 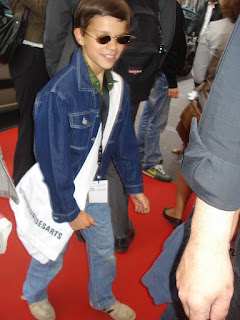 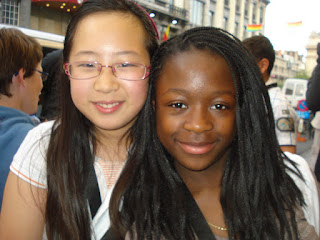 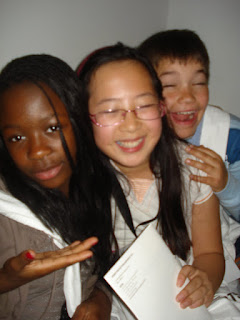 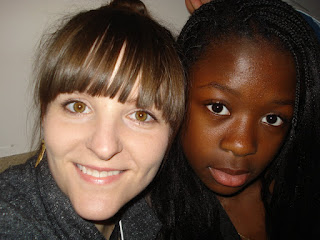 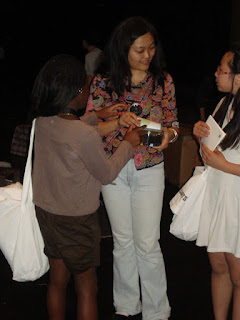 Meeting the cast and getting autographs 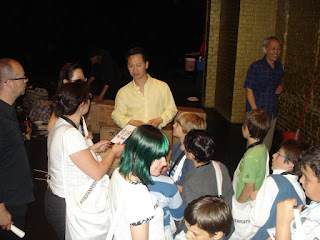 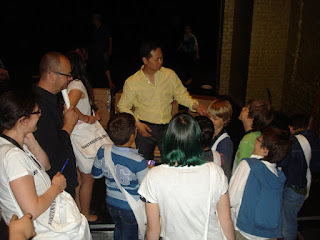 Children's Choice Awards looks like a bit of a no-brainer from the outside: you take a bunch of kids around to shows, they watch them, they fill out an evaluation form. The end. Beyond the logistical coordination, there appears to be few challenges. But you'd be surprised.

Yesterday in Brussels, we got a call from the principal at one of the schools who informed us that she had withdrawn her students from the project. This came as a shock to us, as we had assumed that things were going fine, other than the fact that the festival seems to have a love for difficult work, work that is terrified of providing anything that might satisfy an audience. Which, to my mind, is an interesting thing and one that I do try to take up with the kids, as best I can, given my terrible French and nonexistent Dutch.

So why? For a number of reasons:
1. the shows are too complicated for the children
2. it's taking too much time.
3. we're not teaching them how to construct their criticism.
4. the questionnaire we've provided is too unsophisticated and doesn't require intelligent engagement.
5. we didn't teach them how to be a jury.
6. they can't use the experience in class
7. the kids are tired from staying up til 10-11pm.

We tried to defend ourselves, but nope, they were finished.

So one of the project coordinators called up all the parents individually, informed them of the decision (to the parent's shock) and invited them to continue to participate, which merely requires dropping off and picking their kid up from school. At this point, we've got most of the kids continuing in the project, including, bizarrely, the son of the school's principal.

I won't speculate as to why this has happened, since we're still rolling this project and I don't want to offend. I'll just defend each of the points.

1. yes, the shows are complicated. Complicated for me too. It's by reaching for things that are challenging that we increase our understanding of the world. When you build muscles, you don't lift weights that you can lift, you lift weights until you cannot. You break your muscles, so that they will heal themselves, adding bulk to prepare for the next attempt. The brain is a mushy muscle.

2. The time requirements have been laid out since the beginning. No surprises there.

3. One of the problems with the time, is that because we don't want to bring the children home too late, we don't have a lot of time to debrief, so to extend the time to do this we would have to keep the kids out later, taking up more time and making them more tired. On the other hand, we do talk about the shows as much as we can (I can't really communicate with the kids to any great effect, since i can't speak enough french to debate.) On the other hand, the students have met almost every artist after the show and have had about 10 minutes to ask them anything they like. If that's not good enough, it's hard to say what might be.

4. The questionnaire is a direct rip-off of the form that juries are given at the Canada Council, when they are sitting around and deciding on the fate of millions of dollars and people's careers.

5. But they are a jury, the moment we said they were a jury. No learning required. That we choose not to impose a form or a style or methodology is an artistic choice. We want their opinions without too much imposed from outside. During a first workshop, we took them through the evaluation form and explained that to them, which was more than I got when I was on the Canada Council jury. This is life, people, one is rarely prepared for the jobs we have to do, yet we do them anyway.

6. Two things: 1. So? 2. That would be a failing on the teacher's side. Here's a link to Ranciere's The Ignorant Schoolmaster (http://www.mediafire.com/?mn3fjsyuond), which describes the emancipatory education of Joseph Jacotot, a post-Revolutionary philosopher of education who discovered that he could teach things that he himself did not know.

7. Each child sees 5 shows over the course of twenty days, and of those twenty days, six of them are weekends. It doesn't seem too onerous to us, and the other two schools have not commented.

Anyway, once all this is over, I'll offer some opinions as to what I think is REALLY going on based on observations I've made, but for now, I'll leave it at this except to thank the Kunstenfestivaldesarts for supporting the project and, in particular, commending their decision to turn to the parents, many of whom, it should be noted, got back to us once they discussed it with their kids.

In the end it looks like this will be an interesting lesson for...THE SCHOOL! Which, ultimately, is what the project is really about: the accomodation of children and their views, opinions and presence. The kids are telling their teacher and principal that unilateral decisions are unacceptable. C'est tout.
Eingestellt von Unknown um 7:57 AM
Newer Posts Older Posts Home
Subscribe to: Posts (Atom)