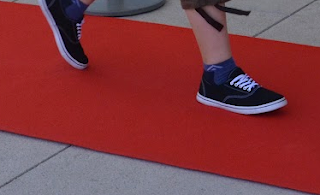 One of the criticisms we've received even before the project was developed was the use of the red carpet and giving the kids a star moment. The concerns are usually that 1) It's fake. 2) Emphasizing empty fame - fake or not - is politically regressive.

1) It's Fake. No, it's not, it's performative, which means that it's becomes that which it portrays. It's real because we say it's real. In the context of the festival, these young people are VIPs. Perhaps even more important VIPs than the artists. There's a never ending parade of artists willing to be artists but such is not so in the case of young people willing to be audience for contemporary performance. Audience development, particularly of difficult to access populations, is a tough slog and public support of the arts  depends to some degree on the continued appreciation of the arts by the demographics that these young people represent. They are, as they say, the future and if in the future we want to continue to fill the seats in the theatres, then we're going to need these kids.

Good thinking on this from the head of Canada's National Theatre School and chair of the Canada Council, Simon Brault.

2) Fame is stupid. Yeah, yeah, yeah and the sooner you learn that the better. So that's our contribution to progressive politics. The sooner these kids get their 15 minutes out of the way and get on with their lives the better. Like this guy:

Prescient but still a douchebag, Andy Warhol demonstrates that he and his crew deserve fame even less than the jury: http://youtu.be/ESGrKwIdb8A
Eingestellt von Darren um 10:10 AM
Newer Post Older Post Home