Last night the doors of the Battersea Arts Centre were held as the The Children's Choice Award Jury sped* across London with Tony Miller (Deputy Head) racing against the clock to see MEETING.

On arrival, at the time the show was due to start, Darren threw out the red carpet and a bell was rung and an announcement was made that the Festival Jury had arrived and would be walking down the red carpet and first in the doors to the theatre! What an entrance!!!

In all the commotion not many photos were taken, though the Jury got to meet the brains and bodies behind the work - Antony Hamilton and Alisdair Macindoe after the show, and ask them how exactly they were able to move like robots? Where and how were the invisible strings attached to their body? and would it be easier to have strings attached to the onstage pencil boxes? There was lots of giggling at the symmetry of the dancers, with the Jury unable to comprehend how the boys were moving in sync! 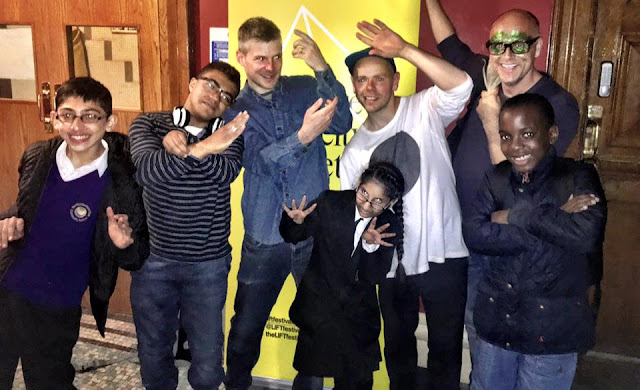 *Please note - no speed limits were broken, no red lights were disobeyed. This is merely a figured of speech in this context.
Eingestellt von Unknown um 6:17 PM
Newer Post Older Post Home