Norman: A Tribute to Norman McLaren 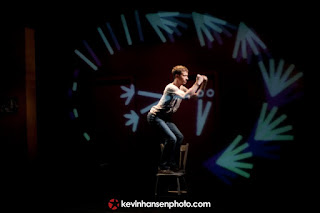 From the Program: A tribute to late filmmaker Norman McLaren, this one-man show plunges audiences into the fascinating world of the great pioneer of animated film. Employing innovative virtual projection technologies developed by Lemieux and Pilon, Norman reveals the power, modernity and humanism of Mr. McLaren's creative genius. Combining interviews with his co-workers- recreated by the magic of their technology, audio and visual explorations- and the masterful dance movements of Peter Trosztmer who literally interacts with the celebrated filmmaker's cinematic universe, Norman is a true revolution in the world of the performing arts.

Giovanni: "I really liked the lights. They were crazy. I also liked the dancing (specifically the guy spinning on his hands)."

Jade: "I liked the special effects. I liked the little clips, they were interesting."

Tasnam: "The music, the dance moves, how it was done, lots of people, lots of feelings."
Eingestellt von Eva um 4:30 AM
Newer Post Older Post Home